Septoplasty is a corrective surgical procedure done to straighten the nasal septum.

Septoplasty is a corrective surgical procedure done to straighten the nasal septum, the partition between the two nasal cavities. Ideally, the septum should run down the center of the nose. However, when it deviates into one of the cavities, it narrows the cavity and impedes airflow. Often, the inferior turbinate on the opposite enlarges, which is termed compensatory hypertrophy. Deviations of the septum can lead to nasal obstructions. 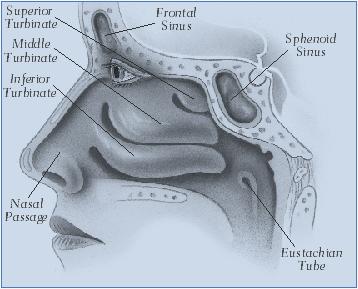 How is a septoplasty performed?

The procedure is usually done under general anesthesia and involves making incisions totally within the cavity of the nose. No external incisions are usually necessary. Very meticulous dissection is done in lifting flaps from either side of the deviated cartilage and bone. The deviated cartilage and bone is then removed, and the septal flaps are re-sutured together. Occasionally an endoscope is used for certain cases, especially those that are re-dos from other surgeons.

Dr. Scaccia performs the septoplasty under microscopic illumination/magnification in order to better visualize his dissection to allow for a more precise and thorough removal of the deviated cartilage. Often, surgeons will not go deep enough into the nose to remove the offending deviated septum. Dr. Scaccia will often take some of the cartilage that has been removed, straighten it, and place it back into the nose to help provide support or, occasionally when performing a simultaneous rhinoplasty, use it in correcting deformities of the outer nose. Very light packing is used, and large breathing straws are placed in each nostril so that the patient may breathe through his nose upon awakening from surgery. There is usually only very mild postoperative pain associated with the surgery, and most patients can return to work within a few days.

Dr. Scaccia finds it is very important to also evaluate the size of the turbinates preoperatively and often will modify their sizes while correcting a deviated septum and attempting to improve the patient's airflow/breathing. Small amounts of the inferior turbinate can be removed transnasally, often assisted by the use of an endoscope and suction cautery to help further improve airflow. There are three turbinates on each side of the nose: superior, middle and inferior. The inferior is the one that is often modified. Usually, no more than 30% of the inferior turbinate is removed.

Prior to offering a surgical solution to nasal obstruction, whether it be a septoplasty and/or turbinectomy, Dr. Scaccia will always attempt to improve your symptoms in a very conservative fashion with medication such as steroid sprays, saline irrigations and antihistamines, and decongestants. However, if all this fails, the patient has a thorough understanding of the procedure and risks, and assuming the anatomy of the nose lends itself so that a surgical correction would be beneficial, then the various options for improving the airway will be discussed with the patient.

Interested in learning more? Please contact the staff at riverside facial plastic surgery and sinus center about scheduling an appointment.